In the mid to late 1930s, when The Guernsey Cow was still known as The Exton Dairy Grill, Larry Polite was already making a name for himself and his place with both his ice cream and his famous cream caramels. Of all the materials both my grandparents saved from The Cow the largest gap consists of the recipes for ice cream and caramels.

Cooked up in huge copper kettles, the caramels became truly world famous as tourists stopped, heading East or West along the Lincoln Highway, before turnpikes and bypasses. When they couldn’t bring ice cream home to places like Michigan, California and beyond, customers brought tubs of the caramels with them. Letters soon followed requesting delivery of caramels from all over. Flavors were chocolate, vanilla and black walnut which seemed to be a the most popular request in the letters we have.

This was an early card that was handed out to customers encouraging long distance orders of caramels and candy. Note the proprietors’ names, “Polite & John”. This was early on when my grandfather had partnered with Jimmy John who later went on to make a name for himself in the hot dog and sandwich business south of West Chester. The reverse side of the card reveals a typical request:

In September of 1935, Polite had sent caramels to Frank B. Foster’s assistant, Sara Osborne, in Philadelphia. Osborne had been very helpful in the transactions that led to Polite purchasing the business from Foster and she stayed in close contact through the years. My grandfather routinely sent gifts and was also probably, in this case, showing off his new caramel product. Her letter began, “Your caramels are very good, and I presume you are now making these yourself. In fact they are bout the best I ever tasted.”

She then went on to suggest he improve his packaging since they “were received in rather bad condition…” and went on to say, “your paper was too thin and the string too light to carry them.” No doubt this led to the need to proper containers that would travel well and could be shipped as well.

Later, the caramels were sold in waxed cardboard tubs with a die-cut cow head in the top to give it a fun way to dispense the candies. The cow head was an easy reach for small hands but not too small for adult hands either. 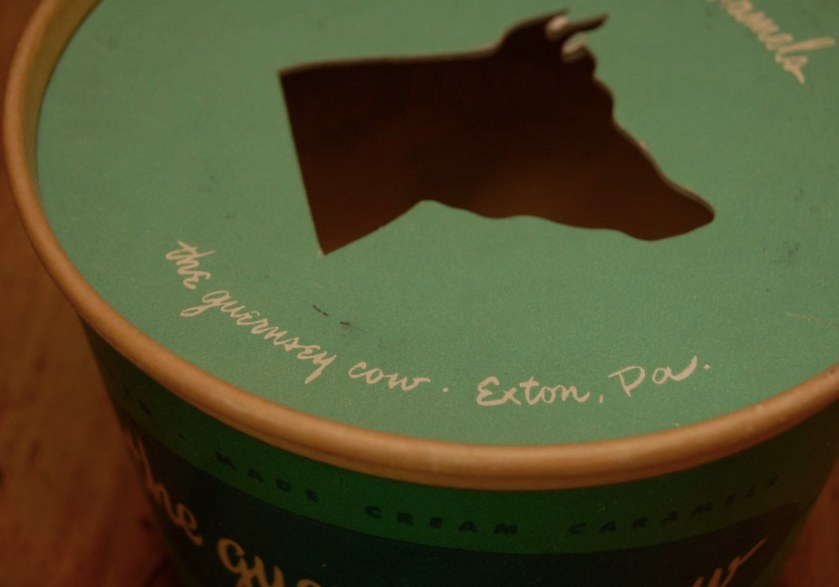 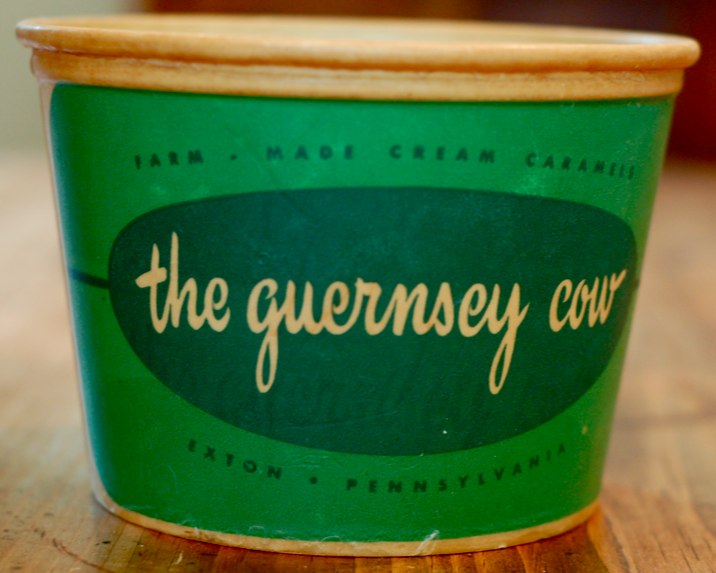 In a May 3, 1951 article in The Archive (of Downingtown, PA) celebrating Larry’s 20th year in business, the writer detailed some of the challenges in caramel making:

Two days a week is caramel making day. Recently when he was having trouble getting the candy to the right consistency for wrapping — it was either too soft or too hard — he hit on the ide of plugging in his wife’s hair dryer. Now the caramels can be softened or hardened to the proper degree by pushing the hot or cool air button.

This photo and the other of my grandfather were most likely taken by avid photographer, Jimmy John.

I meant to post and a link to the article that appeared at the beginning of June in the Philadelphia Inquirer. For those readers that aren’t local, you can read the whole thing here:

We'd love to hear your own stories or see your photos. Leave a comment on any of the posts or send an email to s.mcglinch@gmail.com